The Missing Comma in your BCP

I have some bad news for you.  Your Book of Common Prayer is, well, illegal.  Something dastardly and manipulative has stolen important punctuation from the middle of your Catechism!  It is high time a commotion was caused over this theft.  Crack open your standard BCP and turn to the question “What meanest thou by this word sacrament” in the catechism and this is what the answer will say:

“I mean an outward and visible sign of an inward and spiritual grace given unto us, ordained by Christ himself, as a means whereby we receive the same, and a pledge to assure us thereof.”

This is what it should say:

“I mean an outward and visible sign of an inward and spiritual grace, given unto us, ordained by Christ himself, as a means whereby we receive the same, and a pledge to assure us thereof.”

Spot the difference? The comma has been stolen away after the word grace!  I swear I am not splitting hairs.  This is actually a much more serious issue than it might seem because it is both illegal and it undermines the clear Reformed stance of our Formularies with regard to the Sacraments.  Let us look at these two issues.

Firstly, the missing comma is arguably illegal because it breaches our trust.   The Book of Common Prayer is not an ordinary book.  I don’t just mean that it is extraordinary due to its captivating cadence, decisive doctrine, and soaring sentences (though this is certainly true).  Unlike nearly every other book the BCP is a legal document, it is attached to an Act of Parliament - namely the 1662 Act of Uniformity.  If there is ever a dispute over what the text of the BCP should be we need only recourse to this original document or the copies which were authenticated and signed by the Royal Commissioners and sealed by the Great Seal of England.  In all of these the comma after ‘grace’ is clearly present as this facsimilie of the BCP attached to the Act of Uniformity shows. 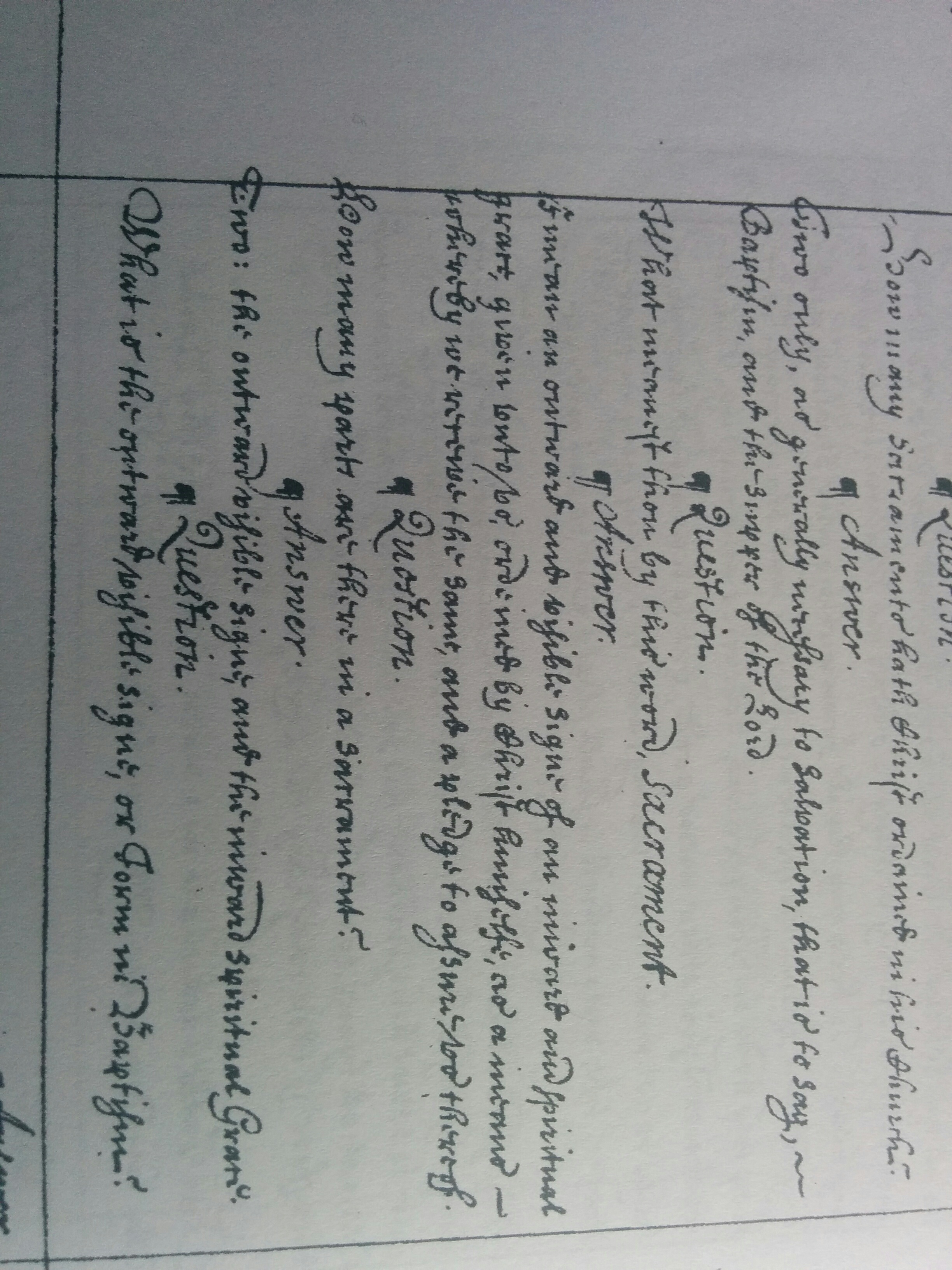 When the comma was removed from printed versions ties very much into the second issue - the theology of the Catechism. The comma was stolen from our Catechism in the midst of the Oxford Movement and the pushing of Ritualism upon our Church in the mid 19th century.  It was first dropped in the prayer books printed by the Society for Promoting Christian Knowledge - a publisher quickly established as a ritualist stronghold. Around the same time The National Society published a teaching aid based on the Catechism and this contained explicit comment saying that there should be no comma after ‘grace’ and having a pause there obscures the “true sense.”  It is not hard to spot an agenda (and duplicity) at work here!

So why were the Ritualists trying to change the Catechism?  There were two reasons.  Firstly, the Ritualists were firm believers that the sacraments by definition always convey inward and spiritual grace - they work ex opere operato.  You do not need faith, you do not need to receive rightly; the simple act of receiving blessed sacraments will convey their benefits.  Baptism itself is salvific and the Lord’s Supper is always beneficial.  Secondly, the Ritualists wanted to teach that the sacraments - thinking especially of the Lord’s Supper - were actually sacrifices we offer to God.  It is thus important that it is the grace which is given to us and not the actual sign which is what we offer up to God.

None of this is the teaching of the English Reformers nor the official doctrine of the Church of England.  Article 25 teaches that the sacraments are not by definition conveyors of grace but rather it is only in those who “worthily receive the same they have a wholesome effect or operation” - only for these does the “sign of grace” become “effectual.”   Article 27 again emphasises that a person must receive baptism “rightly” whilst Article 28 speaks of the Lord’s Supper only benefitting those who “rightly, worthily, and with faith, receive…”.  The whole point of Article 29 is to make utterly indisputable that the Church of England sides with Reformed sacramental theology and not Lutheran sacramental theology by denying that wicked and faithless people do not in any sense receive Christ - let alone grace - when receiving the Lord’s Supper.

The Reformed sacramentology of our Confession of Faith is fully supported by the correct wording of the Catechism.  Grammatically speaking - and I’m not trying to sound pretentious here - the participial adjective “given” must apply not to the “inward and spiritual grace” from which it has been immediately comma’d off but instead must apply to “outward and visible sign”.  Therefore, what has been given to us are the visible signs, namely bread, wine, and the waters of baptism.  These are not something we give to God - a sacrifice - but clearly something God has given to us - a sacrament.

Likewise the Catechism does not teach that a Sacrament is “a sign and grace given to us” but rather it is “a sign of grace.”  The giving of grace is signified but is not essential nor intrinsic to there being a sacrament.  This is exactly what the Catechism’s answer goes on to explain - the “outward and visible sign” is “a means whereby we receive [an inward and spiritual grace], and a pledge to assure us thereof.”  It is a means but not a guarantee.  The sign is given as a pledge so that we know that as surely as we get wet in baptism or chew on bread in the Lord’s Supper just so surely has God promised to use these, when received in faith, to give us grace.

It is rather amazing how a single comma can change the entire theology of the Sacraments in the Catechism from a Romanist sacerdotal understanding to a Protestant and Reformed one.  There is no ambiguity though in the textual witness, every BCP should have a comma after ‘grace’ and the absence of it is underhanded.  I do not know if the printers at Cambridge and Oxford are aware of their error  but at the very least I would certainly recommend everyone get out a black pen and correct every BCP they own or their churches use.
Posted by Adam Young at 16:31:00
Email ThisBlogThis!Share to TwitterShare to FacebookShare to Pinterest
Labels: articles, BCP Commentary