Gordon Ramsay and the power of Delusion

It is good to feel human again!  After nearly two weeks of brutal flu which laid the entire household semi-catatonic I finally feel like a living and breathing human.  Praise the Lord!

During those days of fatigue and sheer 'ugh' I did what many ill people do—I binge watched TV.   To be honest I didn't feel up to doing much else.  For some reason my show of choice was Gordon Ramsay's Kitchen Nightmares.  It was awesome.  It was hilarious.  It was a revelation.

If you don't know the show I would highly recommend you watch it.  It is entertaining, it has that yuck factor near the start but then ends on a feel good note of hopefulness.  The language is pretty strong and Gordon is certainly an angry individual but don't let that shock you into not watching.  The premise is that Gordon Ramsey—one of the most critically acclaimed chefs and most successful restaurant owners in the world—travels around America and goes to restaurants in dire trouble.  These are places with no customers and in massive debt but which cannot seem to figure out why.  After tasting the food and seeing their service he inspects the kitchen then comes up with a rapid turnaround plan. This generally involves a new menu focussed on truly fresh and local food, a complete renovation of the restaurant and possibly the kitchen.  Often he has to help families and staff come together, forgive past hurts, love each other, and get on the same team.  It is at times quite emotional and heart-warming stuff. Seriously go watch it!

When I said this show was a revelation I meant it—God has used it to remind me of certain truths about human nature and faith which I believe are worth reflecting on.  In this post and a couple of others I want to consider Gordon Ramsay's Kitchen Nightmares (GRKN) in light of the glorious truth of Jesus Christ and the truth He has revealed to us in Scripture. 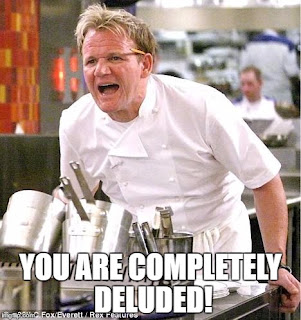 I want to start with the shocking ability humans have to delude ourselves.  GRKN has a brutal way of showing this fact.  Time and time again the owners and chefs of the restaurants are in such massive pits of denial that they have come to believe their lies and seem to live in an alternative world with little bearing on cold hard reality.  Not only do owners often think their food is 10/10 when it is actually disgusting and almost inedible but they simply don't hear the complaints, they filter out the countless plates of food sent back to the kitchen in disgust, they don't see that the food is why people never return.

Some even delude themselves into thinking that what they serve is not only good top quality food but that it is fresh and flavourful.  It takes a special kind of stupid to think that frozen food is fresh yet constantly food advertised as 'fresh' is in fact store bought frozen and simply defrosted in microwaves.  Fish advertised as "catch of the day" is actually a week old and frozen.  Yet the owners don't even realise that they are deceiving their customers, that they are fakes and liars.  They are so deluded they think what they are doing is normal and right.  Even when a world class chef takes them to task and says their food is horrible they reject what he says.

It is hard to put into words—you really have to watch it to see just how deluded many of the owners are at the start of the show.  Watching it you almost want to scream because to you it is so unbelievably obvious that they are wrong and Gordon Ramsay is right.  The astute person though would not use this programme as a telescope to look at the faults of others but a mirror to consider their own life.  We are all susceptible to such nonsense, the human brain seems wired to accept contradictory truths and believe things which are frankly beyond belief.

This is a problem the church is facing today.  The church is to be the bastion of truth in a world of lies and half-truths.  The Scriptures are to be, as Jesus Himself said, "unbreakable".  In two key areas the church and her people are failing and falling into delusion.  On the one hand we all have become so competent at excusing our own sins that we practically deserve medals for effort.  If we truly look at our lives I am sure we can all see areas where holiness is not the first word that comes to mind and yet we have found ways to accept this and make it OK when in fact it is such a terrible  tragedy that the Son of God had to die in agony because of it.  John tells us that anyone who thinks they are without sin is a liar and God is not in them.  That is a serious charge we all need to internalise—are you deluding yourself with your own sinfulness?

The other aspect facing the church is not so much our delusion over the seriousness of our sin but the whole theology underpinning the faith.  Huge groupings in the church believe that they are Christian and yet don't believe the basic tenants of the historic faith.  They say that Christ is Lord but they don't think salvation is in Him alone or even that He truly rose from the dead.  They look at what the Bible says about adultery, divorce, fornication—any sex outside of the marriage bed of one man and one woman—and call black white and white black in such a way that it beggars belief.  They ignore Scripture or twist Scripture or abuse Scripture to make it say what they want it to and then think that this is the real faith and what they are doing is good and loving.  They cry foul when the Church decrees in favour of orthodoxy and rail against her leaders and teaching, even going so far as to purposefully break the rules, yet remain within her taking her money and living without seeing the complete lack of integrity in what they are doing.  They seem to live in an alternative world  believing that they are merely changing attitudes when really they are fundamentally changing Christianity and truth.

Delusion and wanting to believe something so much that you make it your reality is a powerful and dangerous thing.  People get hurt—just as people get food poisoning in the kind of restaurants seen on GRKN.  Maybe it is time for some Gordon Ramsay's to stand up in the church and make clear the delusion; albeit with less offensive language yet retaining all the passion.  The church needs these passionate people to speak up, to lay bare the truth, to call it how it is.  But these people need to do it not from hate but from a real longing to see success and growth and hope return.

And whilst we stand up for the time honoured truths that God has revealed we must also take a long hard look in the mirror to seek out our own delusions: not just in sin but in our own theologies and practices for they are surely there too.